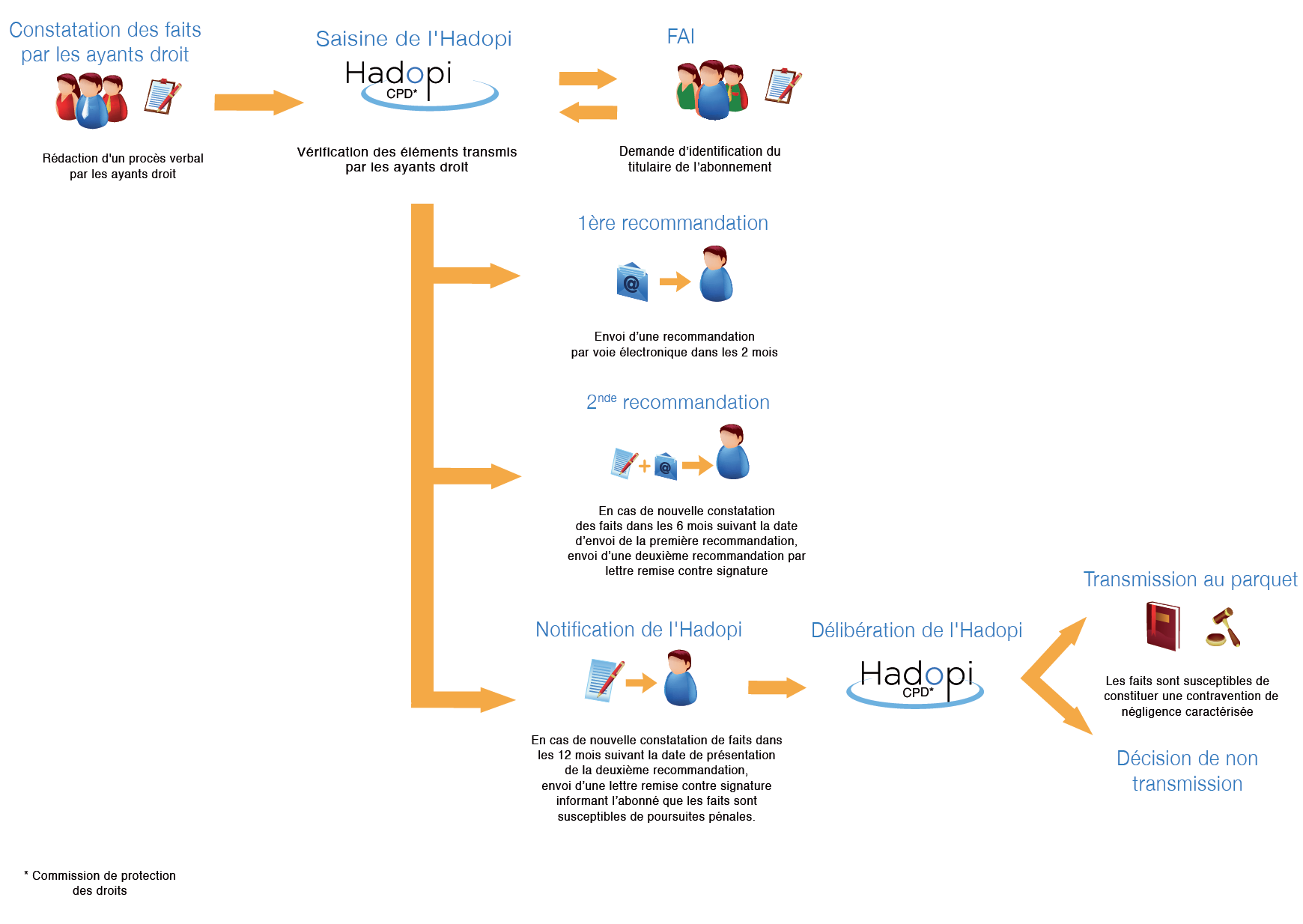 As of 1 January 2022, the graduated response in France is administered by the Autorité de régulation de la communication audiovisuelle et numérique (ARCOM).

Established by Law n° 2021-1382 of October 25, 2021, on the Regulation and Protection of Access to Cultural Works in the Digital Age, ARCOM is the result of the merger between la Haute Autorité pour la diffusion des œuvres et la protection des droits sur Internet (HADOPI) (High Authority for the diffusion of works and the protection of rights on the Internet) and the broadcasting regulator, the Conseil supérieur de l’audiovisuel (CSA).

Originally the graduated response was managed by HADOPI, which was created by the Law of 12 June 2009 (“Loi HADOPI I”). Following the intervention of the Conseil constitutionnel, a second law, Loi HADOPI II, was passed in October 2009 to rectify certain defects found to be unconstitutional. This legislation is supplemented by regulations, so establishing a comprehensive statutory scheme for the Graduated Response in France.

The “Réponse Graduée” is founded on a new Article of the Intellectual Property Code, Art. 336-3, which imposes a duty on an Internet access subscriber to ensure that his connection is not used for the purpose of infringement.

When a right holder informs HADOPI of an apprehended infringement, an independent unit of HADOPI, the Commission de protection des droits (CPD) (Rights Protection Commission), reviews the evidence provided within a period of 2 months. If the facts appear to indicate a breach of duty, the CPD sends an e-mail (“recommandation”) to the subscriber notifying him of the facts, reminding him of his responsibility, informing him of the availability of legal content on the Internet and advising him how to secure his Internet connection against unauthorised use.

If a further incident of apparent infringement is notified within 6 months, the CPD sends a second e-mail, confirmed by recorded-delivery letter, to similar effect.

If a third incident is notified within a period of 1 year, the CPD informs the subscriber by recorded-delivery letter that the facts may result in prosecution. Subject to any representations made by the subscriber, the CPD may refer the matter to the Public Prosecutor. In October 2011, in case N° 342405 the Conseil d’Etat ruled that the mere sending of notices to subscribers did not engage Article 6 of the European Convention of Human Rights (right to fair trial – presumption of innocence).

The subscriber may receive a fine of up to 1,500 euros (7,500 euros for a company), based on the negligent use of his internet connection after warnings. In more serious cases, the Public Prosecutor will charge the subscriber with a copyright offence, pursuant to existing law. In addition to the normal remedies (a fine or imprisonment), the court was empowered to order that the defendant’s Internet access be suspended for up to 1 year. Telephony or television services were not affected. However, this power has been repealed (see below).

On 29 September 2011, HADOPI published its first Report, setting out in detail its history and legal background and providing information on its first year of practical activities. The latest statistics on the graduated response were issued in March 2020.  In the period 1 January 2019 to 31 December 2019, the Authority stepped up its efforts, issuing 619,687 first warnings, 208,104 second warnings and referring 1,748 cases to the Public Prosecutor.

Prior to the 2012 Presidential election, supporters of the victorious Socialist candidate, François Hollande, seemed to suggest that HADOPI would be abolished. However, on 13 May 2013, the Lescure Report on the “cultural exception” in the digital age, commissioned by the Government, was published in two volumes (here and here). The Report’s proposals  would transfer HADOPI’s function to the Conseil supérieur de l’audiovisuel, while removing the potential sanction of suspension of Internet access. The Graduated Response would hence continue to operate in France.

Decree n° 2013-596 of 8 July 2013 abolished one aspect of the HADOPI system, namely the imposition of a suspension of access to the internet for a period of up to 1 month. A fine continues to be payable for a negligent failure to secure the internet connection following warnings of infringement.

On 8 July 2015, Senators Loic Hervé and Corinne Bouchoux submitted a committee report to the Senate proposing the reinforcement of the HADOPI system, in addition to other measures to reduce online piracy. The High Authority itself would have the power, on the basis of decisions made by an independent sanctions committee, to impose an administrative penalty on recipients of a third notification, after an adversarial procedure. Activist group La Quadrature du Net expressed outrage at the proposals.

In its decision of 23 December 2015, at the instance of Bouygues Télécom, the Conseil d’Etat ordered the Government to issue a decree providing for the payment of ISPs’ expenses of complying with HADOPI’s requests for information under the GR procedure. Article L34-1, paragraph III, of the Code of Post and Electronic Communications provided for the retention of personal data by ISPs for purposes of official requests, including those of HADOPI. Regulations were to be issued provide for the reimbursement of the ISPs’ expenses. Décret n°2006-358 du 24 mars 2006 inserted an Article R213-1 into the Penal Code, providing that tariffs for the recoverable expenses of ISPs in relation to providing personal data to law enforcement authorities would be defined by ministerial order. However, the Government had failed to issue such an order. Accordingly, the Conseil d’Etat quashed the implied decision of the Prime Minister not to issue tariffs and gave him 6 months to do so, on pain of a penalty of €100 per day of default. Bouygues Télécom’s damages claim of €1.3m was adjourned.

On 20 May, 2020, the French Constitutional Court gave a judgment on the constitutionality off HADOPI’s powers to obtain under Article L-331-21 of the French IP Code.  The Court revoked part of this provision as unconstitutional, holding that the power of Hadopi and licensed investigators to obtain “all documents, on whatever medium”, including data retained by ISPs.  However, their power to obtain name, address, telephone number and email address of account holders was declared constitutional.

Hadopi issued a press release observing that it had never used the powers in question and required only those declared constitutional in order to carry on its mission.